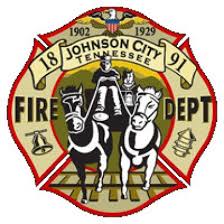 A total of five people along with their pets escaped injury after two condos caught fire Sunday night in Johnson City. According to Mike Hill Prevention Officer with the Johnson City Fire Department, firemen on the call had their hands full with the intense blaze that occurred in the Woodstone Subdivision around fifteen till nine Sunday evening. According to Hill, three engines and two ladder trucks first responded to the blaze and were backed up by three additional engines. The investigation is continuing. Both Condos were heavily damaged in the fire.