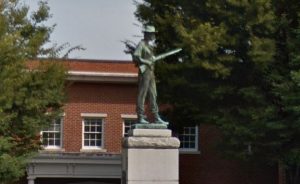 More than 20 Washington County, Virginia residents shared their opinions on a petition drive to have a Confederate monument removed from the courthouse grounds in Abingdon.

Petition author and political science chair at UVA-Wise Heather Evans spoke during Tuesday’s Board of Supervisors session and said the statute dedicated in the early 1900s was that community’s effort to try and rewrite Civil War history and is not an equal symbol for justice.

Proponents of the marker also spoke out, including 72-year-old Billy Fuller who questioned if folks even paid attention to the inanimate object when visiting the courthouse.

Chairman Dwayne Ball said a project to remodel the courthouse will soon go out for bids and the statute issue would have to be addressed in those plans.

Voters said in a referendum vote in November they wanted the historic court center remodeled instead of a proposal to move those operations to the former KMart shopping center near Interstate 81’s Exit 17.

The move to remove Confederate monuments has grown since several states including Virginia have decided to have them taken down and moved them to other areas such as museums following the death of George Floyd and the wave of efforts to heal racial divides.

The Virginia General Assembly passed legislation that became law earlier this month that allows counties and cities to decide the fate of those types of historical markers.