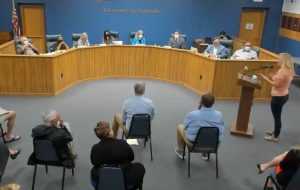 Several changes have been made to the mask policy for one of the area’s largest school systems.

Starting Tuesday, Johnson City School K-4 grade students will not be required to wear a mask while sitting at their desk, and will only be required to wear it while moving through the building. It’s one of several recommendations approved during the district’s school board meeting Monday night, and comes as parents expressed concern about the long term effects of children wearing masks, especially with more students expected to return to the classroom in the fall.

“What are our kids coming back into? Because obviously it’s no longer as much of an issue as it was. The mandate has been lifted. We have signs showing the harm it does ongoing,” said one parent.

Other concerns expressed by the large crowd that was for ending mask practicing policies for students was why the policies were still in place.

“Masking kids are a little bit of a facade, I mean it’s kind of wishful thinking on our part that they’re going to keep it clean and sterile. I know when I pick my son up from school, it’s soaking wet, it’s covered in dirt, it’s covered in food, it’s pretty gross,” said another parent.

The board will also allow mask wearing to be optional for teachers and students during the summer session.