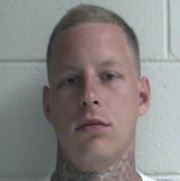 A Johnson City man has been arraigned on three felonies after investigators determined he altered an order of protection document he requested to be served on his estranged wife.

David A. Dixon, 30, is charged with forgery, criminal simulation, and false reporting following an investigation by the Washington County Sheriff’s Office.

Officers were told that Dixon made the request but the order had not been issued. Dixon also forged the document so that he and the couple’s child would be included in the order.