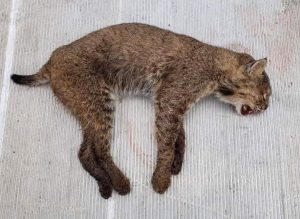 State game officials confirmed that the animal was killed when it was hit by a car in Mouth of Wilson in neighboring Grayson County and the cat was carrying rabies at the time of the incidents.

One victim was flown to a Bristol hospital for injuries to his legs and arms. Investigators also said the bobcat tried to walk into an occupied home and attacked a dog and livestock located in the same area.