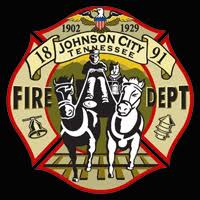 A Johnson City woman is sent to the hospital,,,her house is heavily damaged and at least one dog has perished in an early morning fire. Crews responded to the fire at a house on East Ninth Avenue in Johnson City around 5:30 Wednesday morning. Three fire engines and several ladder trucks battled the blaze that damaged about half of the house with heavy smoke damage throughout the home.