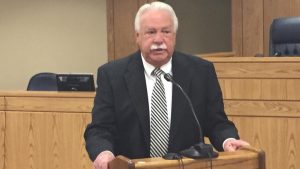 The vacancy left in the First Judicial District by the death of former dristrict attorney Tony Clark, will be filled by Assistant District Attorney Ken Baldwin. Clark died of naturla causes in Nashville last week. Baldwin is a longtime assistant in his officer. He will serve until the August election in which he plans on being a candidate.