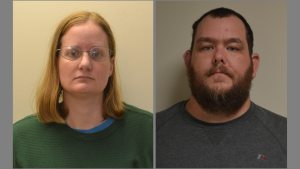 The couple accused of killing a man in September in a Walmart parking lot pleaded not guilty in Bristol Sessions Court. Michael Strouth, 37 and Ashley Strouth, 34, are charged with first degree murder and conspiracy in the shooting death of Michael Heatherly who was found next to his car dead from a gunshot wound. Investigators say the Strouth’s researched plotting and avoiding capture on the internet and either hid or destroyed the rifle used in the crime. They are expected back in court on June 11th.