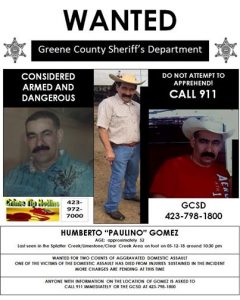 A Greene County man, who could be facing an upgraded murder charge after his wife dies from injuries she received in a violent beating, is waiving extradition back to Greene County. Humberto Paulino Gomez allegedly beat his wife. Beatrice Florez outside the couples home in Limestone earlier this month. Gomez also is said to have shot at a man during the altercation. Gomez fled the area to Anson County , North Carolina where he was captured two days later. He is expected back in Greene County soon for a hearing in court.