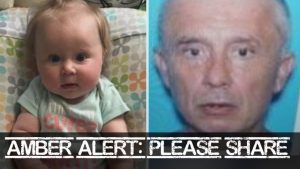 The Amber Alert for Seven month old Emma Grace Kennedy is canceled and she has been found safe. Her father Carl Ray Kennedy has been arrested in Randleman, North Carolina.

Emma Grace Kennedy appears to be in good health, according to officials. She is currently being evaluated at a local hospital.