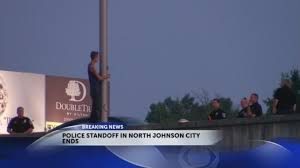 A man suspected of attempting to rob two business in Piney Flats last week, then forcing a standoff with police and the closure of a section of Interstate 26, when he threatened to jump off a bridge has been arraigned. throat. 32 year old Christopher Brown was arraigned Monday and now has a court date of July 24. Authorities say Brown, is connected to the attempted robbery of a Dollar Tree and Subway restaurant in Piney Flats. Brown, then fled the scene and crashed his vehicle in Johnson City. He then Climbed out of his car and onto the Interstate 26 bridge where he threatened to jump. After several hours negotiators were able to talk Brown down off the bridge.