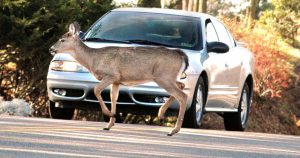 Mating season has begun for deer in Virginia. That means the animals are on the move, and drivers face an increased risk of striking them.

Now through the end of November is the period drivers are most likely to hit a deer. Dawn and dusk carry the highest risk.

Virginia is considered a high risk state by insurance companies. The average claim for someone striking a deer is $4,000. Most accidents don’t result in the animal being hit. Many drivers will swerve to avoid hitting the animal, only to strike a tree or another driver.

Experts say hitting the deer will cause less damage to the car.