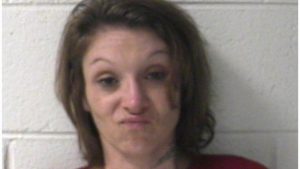 A Kingsport woman is facing numerous charges after visiting and inmate in the Sullivan County Jail.

34-year-old Jennifer Lynn Cole went TO the Sullivan County Jail Extension for a video call with an inmate. She was spotted and authorities know she a suspended license and were investigating her for involvement in narcotics distribution in Sullivan County.

After Cole left the jail and drove off in a Nissan Pathfinder, a deputy followed her and pulled her over. After her license was confirmend suspended, a narcotics K-9 indicated potential drugs inside the vehicle.

A search of the vehicle revealed what police to be a methamphetamine and Xanax. They also found tobacco rolled in electrical tape which Cole told them she was planning on smuggling inside the jail.