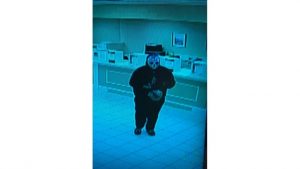 Authorities in Southwest Virginia are searching for a lone bandit who robbed an Abingdon bank Monday afternoon. Police were called to Carter Bank and Trust on West Main Street shortly before three pm. Employees of the bank say a white male, dressed in hark clothing entered the bank and instructed the teller to fill the bag with money. The suspect also stated he was armed but did not produce a weapon. The robber, was wearing dark gloves, a dark hoodie, dark pants and an unusual, bright colored, mask. The suspect may be driving a dark colored, maroon, to dark green, older model Subaru station wagon. He is described as five feet nine inches to five feet eleven inches tall, with a heavy build and walks with an odd gait.