One Of Two, Captured, Armed Robbery Suspects…Now Charged With Arson 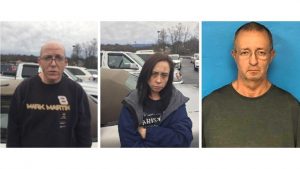 One of two armed robbery and kidnapping suspects recently captured after a two day manhunt is now facing arson charges after admitting he set fire to a camper the two suspects were hiding in. 41 year old Willie Davis Jr, and 42 year old Jennifer Jenkins, both of Sullivan County were captured after authorities received a tip the duo were in a camper on Big Hollow Road in Blountville. Deputies arrived and found the two inside the camper, but did not immediately come out. Then smoke was seen coming from the camper and eventually Davis and Jenkins came out and were arrested. The two are wanted for aggravated robbery and Kidnapping in Johnson County.