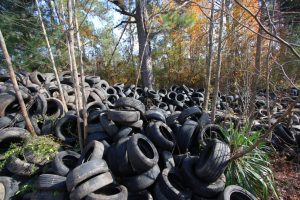 The Tennessee Department of Environment and Conservation has assessed a civil penalty of more than $492,000 against the owner of a tire dumping operation.

TDEC says that RRI VT Bristol LLC is the owner of the 100-acre Vance Tank Road tract used for the tire dumping operation.

Ted Cox of Bluff City is listed as the “sole representative speaking and acting” on behalf of RRI, according to TDEC.

They’ve ordered that no more solid waste be accepted at the site and the owner remove more than 33,000 tires from the property every 30 days. All tires must be removed within a year or the operations will be subject to further liability.

Documentation of the operation dates back to 2012, with the owner being issued multiple violations. Over 400,000 tires have been disposed of in that time with the owner gaining nearly $400,000 through the venture.

An appeal could be filed and if son the intial hearing would be conducted by a administrative law judge who would have the authority to affirm, modify or deny the order of assessment.