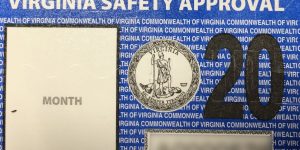 Virginia drivers will likely pay more for vehicle safety inspections in the future.

The General Assembly has given preliminary approval to legislation that would raise the annual price of a vehicle inspection from $16 to $20.

The House and Senated have also approved slightly different versions of the legislation with bipartisan support.

Those for the increase argue that the price hasn’t increased in more than a decade and the addition $4 will help make sure mechanics are fairly compensated.

Opponents argue that the current fee is fair and the 25% increase is too much.