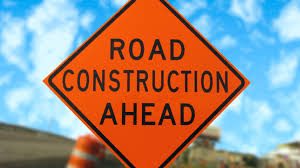 Repairs are underway for multiple roads in Hawkins County that were washed away by heavy rains earlier this year.