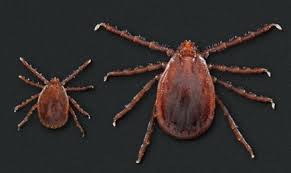 Researchers at the University of Tennessee are on the lookout for a new creepy-crawler. The Asian longhorned tick, first spotted in New Jersey two years ago, has been spotted in several wooded areas in East Tennessee and Virginia. The creatures carried multiple diseases in their native country but so far, the ticks found in the US have been disease-free. The latest reports show the ticks are attaching themselves to just to animals and have only been found on humans in two cases.
(PHOTO: Centers for Disease Control and Prevention)