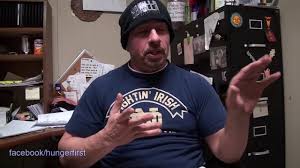 What started out as a city citation to shut down a food pantry for housing some of Kingsport’s homeless, may now end up becoming a day center for the homeless. Last week Hunger First was issued a citation for not meeting city code. On Monday, Michael Gillis and represenatives from Hunger First were told the building could be used for a day center after the agency made necessary changes in order to meet city codes. Michael Gillis says its a much needed resource in Kingsport.

Gillis says a day center will allow those who might not be receiving services to have a place to meet in order to talk with agency officials.