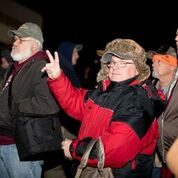 Approximately 150 residents of Wise County Virginia are braving the cold in the streets of downtown Richmond Monday for a rally against proposals by the Governor and the Democratically controlled legislature that would lead to disarming law abiding citizens. Commonwealth’s Attorney Chuck Slemp and other supporters gathered to send off the delegation Sunday night. Slemp says Wise County’s values are under attack and citizens rights are in jeopardy. Slemp told the gathering, the only emergency in Richmond is the one created by the Governor and his divisive rhetoric and dangerous proposals.