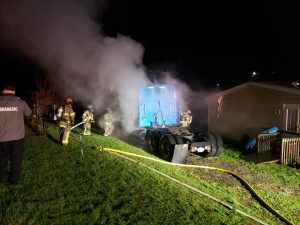 According to the Glade Spring Fire Department, they were called to a fully engulfed tractor trailer around 9:00 p.m, but located no one inside. They also said the trailer was sitting under power lines and close to a house, which reportedly suffered minor heat damage. The tractor trailer also was reportedly not used since December of last year.

The fire was quickly extinguished and no injuries were reported.