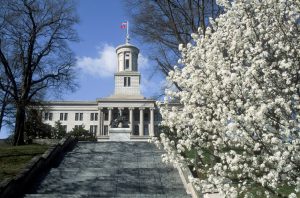 Tennessee Gov. Bill Lee on Wednesday proposed funneling money into relief for tornado and health crises, scaling back planned teacher raises, and socking more cash away into reserves, as the state reacted to the global impact of the coronavirus on everyday life.

The Republican’s administration unveiled the scaled-back budget to lawmakers, who are scrambling to pass the spending plan for the 2020-21 fiscal year and other items they said are “mission critical” before they recess this week and head back to work as soon as June 1.

Some of Lee’s proposals are directly related to budgeting, the recent deadly tornadoes and the growing coronavirus pandemic. Others veered off into unrelated territory, including election law changes.

Lawmakers kept working in close quarters despite federal guidance for people to keep their distance. The legislative building remained closed to the general public, which was encouraged to watch proceedings online.

Lee’s latest budget — which has a suggested 0% economic growth rate — creates a $150 million fund “to help us be responsive to health and safety issues resulting from COVID-19,” and sets aside $575 million to increase the state’s rainy day fund to $1.45 billion by 2021.

At the same time, Lee is now slashing his original proposed teacher pay increases from 4% to 2% and eliminated a proposed $250 million K-12 mental health trust fund.

Yet Lee is seeking to double a grant fund for local government from $100 million to $200 million. The fund provides money to counties and municipalities for capital improvements and utility upgrades.

The plan also drops an earlier push to cut a professional privilege tax worth $40 million annually.

Meanwhile, the GOP-dominant Legislature also considered proposals that would ease requirements for schools choosing to close amid the virus outbreak and tweaked the state’s open meeting law to allow officials to meet electronically rather than in person.

Under the school measure, Tennessee’s student assessment test — known as TNReady — would be canceled and the required 180 days of classroom instruction for the 2019-2020 school year would be waived.

Lee has held off from issuing a statewide school closure mandate in the wake of the COVID-19 outbreak, but his administration has maintained that all schools will likely comply with the request.