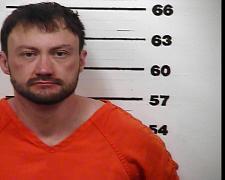 A Hancock, TN man is jailed after police say he broke into a Rogersville residence while naked, said he needed items, and reportedly stated to the homeowner that everyone was going to die.

A report from the Hawkins County Sheriff’s Office says they were called to a house Saturday morning, where they learned from the house owner of the incident. She told deputies that suspect Tomothy Anderson was told to leave, but he stayed for some time. Anderson also allegedly entered two other homes, damaging certain items including two dressers and drywall inside one house. Anderson said he was trying to gather items to survive.

He was arrested on three counts of aggravated burglary, vandalism over $1,000, and indecent exposure.