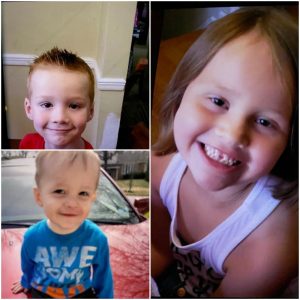 Virginia State Police are reporting, John Allison, the father accused along with their mother, of abducting their three children in Roanoke County is now in custody, but the children are still missing and are believed to be with Ruby Marie Allison their mother, after being abducted Tuesday afternoon. A 2006 Cadillac four door has been recovered and Mrs. Allison is believed to be driving a 1999 Maroon Chevrolet Suburban with Virginia registration of VVU-3796. Six year olds Cameron Allison, and Emma Allison along with 21 month old Colin Allison are believed to be in extreme danger. We have descriptions of the parents and children on line. An Amber Alert is in effect, if you have information of the whereabouts of the children your’re asked to contact the Virginia State Police