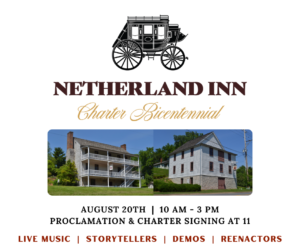 The City of Kingsport is celebrating its bicentennial this Saturday, just after celebrating its centennial in 2017. How is this possible? Officials say this is because the city had two charters– the first in August of 1822, which was dropped, making the city unincorporated until the second charter was signed in 1917.

The public is invited to Kingsport’s Bicentennial Celebration, which will feature storytellers, craft demonstrations, live music, and more. Festivities happen at the Netherland Inn on Saturday from 10 to 3.