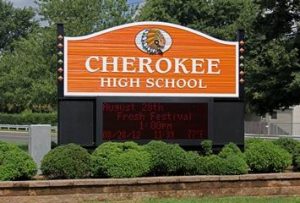 A K-9 sweep of Cherokee High School in Hawkins County by the Sheriff’s Department has resulted in the arrests of two female students on possession of Marijuana charges. 18 year old Jasmine Nicole Miller and 18 year old Abigail Guerrero Mendoza both of Rogersville were arrested after a K-9 picked up the scent of the drug on the campus of the school. The drugs were seized and traced back to both students. The two will appear in court on June 6