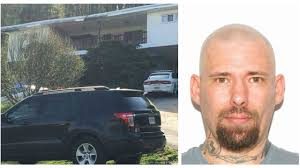 A man wanted for murder in Washington County Virginia is now in custody. Roger Melvin Tackett was wanted for the murder of 46 year old Bruce Douglas Ferguson after a shooting Friday morning on Lime Hill Road in Bristol. According to Washington County Virginia Sheriff Fred Newman, Tackett walked into Ferguson’s residence and shot him three times. Ferguson later died at a local hospital . Tackett was on the run for two days before he was apprehended after an hour long negotiation. Tackett, came out of a friends home in Clinchburg armed with a knife and was tazed by deputies and arrested. Tackett is being held in the Southwest Virginia Regional Jail in Abingdon.