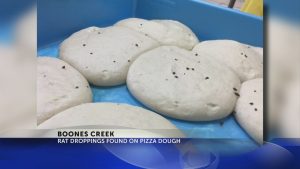 Domino’s claims that a viral photo of rat droppings found at the Boone Creek location in Gray is a hoax, despite health inspectors verifying rodent and pest problem that has plagued the restaurant in recent weeks. Two additional exterminators have been hired since then to deal with the problem. Despite this is a spokesperson for the corporate office is quoted as saying, “We now know this hoax was perpetrated by now two former employees. The material was gravel from the parking lot. It was a shameful act by two people who were clearly not thinking things through.” With actual evidence found by state health inspectors and a contradicting statement from Domino’s corporate, it seems that fake news is infiltrating the entire nation.