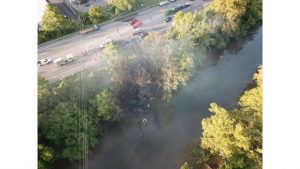 It was a mess, and closed U.S. Highway 58 in St. Paul after an eighteen wheeler lost its brakes, slammed into several vehicles and eventually crashed into the Clinch River where it strangely caught fire. The driver of the tractor trailer was injured but managed to climb out of the wreckage before the vehicle ignited and burned in the waterway. The cleanup process closed U.S. 58 in both directions, before the east bound lanes were reopened early Friday morning. The truck was said to be carrying plastic used in area landfills. No other injuries were reported.