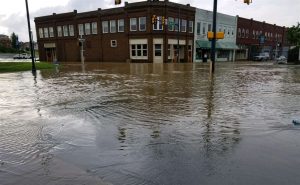 Monday’s heavy rains which brought about an inch of rain in Johnson City caused flooding problems once again in the King Street area. But there’s help on the way. Public Works Director Phil Pindzola says the city has plans to re- contour the street and then drop the water into the Boone Street basin. Pindzola says the improvements to King Street should be complete by the fall.