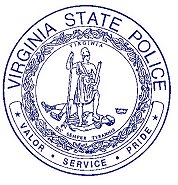 A Special Agent with the Virginia State Police has been arrested on a federal criminal complaint charging him with lying to a federal agent.

According to a criminal complaint affidavit, 46-year-old Shade Workman made false statements to agents with the Federal Bureau investigation who were investigating allegations of Workman’s inappropriate relationships with confidential informants.

A criminal complaint is only a charge and not evidence of guilty. The defendant is entitled to a fair trial with the burden on the government to prove guilt beyond a reasonable doubt.