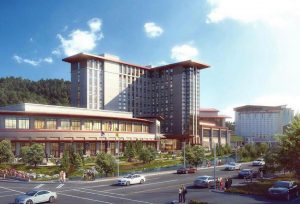 Bristol Casino and Resort developers Jim McGlothlin and Clyde Stacy have entered a public war of words against a competing project proposed by the Eastern Band of Cherokee Indians and Pinnacle developer Steve Johnson.

A statement issued Friday by the group that has Hard Rock International as a partner said the Cherokee only have their best interest at heart and not the current dire financial straits of the city of Bristol. They also criticized Johnson for arguing for a competitive process to select a casino project in Virginia while hiring lobbyists to prevent competing businesses from locating near his retail area.

In a published report last week, Johnson said his casino, amphitheater, and water park in Washington County, Virginia is a natural fit due to its location near Interstate 81. A new website launched by the Cherokee Casino project says their current development in North Carolina attracts more than 4 million visitors annually.

(PHOTO: A new website launched Friday shows a conceptual drawing of the proposed Cherokee Casino that would be located in Washington County, Virginia (Cherokee Casino at The Pinnacle)