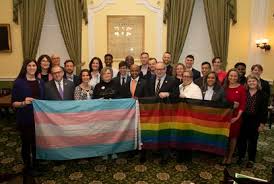 Virginia could be the first state in the South to enact comprehensive anti- discrimination legislation to protect members of the LGBTQ community. The measures were approved Friday by Lawmakers on a bipartisan vote as Democrats continue to advance bills that Republicans blocked for years. Opponents have raised concerns about impacts on religious freedom, while advocates praised the passage of what they called urgently needed landmark human rights legislation. The bill must be approved by each chamber before being sent to the governor, who supports the proposed laws.