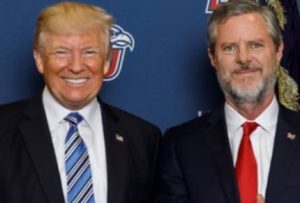 I was adamantly opposed to the mandate from @GovernorVA requiring citizens to wear face masks until I decided to design my own. If I am ordered to wear a mask, I will reluctantly comply, but only if this picture of Governor Blackface himself is on it!#VEXIT#EndLockdownNow pic.twitter.com/twu7r4rWhd

Professor Christopher House said in a tweet that his moral compass and integrity would not allow him to have any further relationship with the Lynchburg school.

House’s resignation letter says he was horrified that the leader of one of the largest Christian schools in the world would use an image that evokes a deep history of racial terror for the purpose of a political statement.