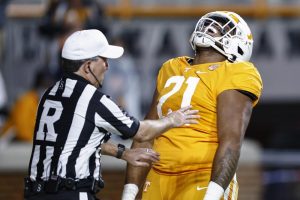 Revenues from the Southeastern Conference issued to the University of Tennessee later this year will be $250,000 less as the school is sanctioned due to Saturday’s debris throwing, trash flying display at Neyland Stadium.

The SEC has ruled against stopping alcohol sales in Knoxville for future home games at this point but that could be enforced if similar actions take place.

The 65 people who were either ejected from the game or arrested will likely be banned from all home athletic games for the remainder of the 2021-22 school year.