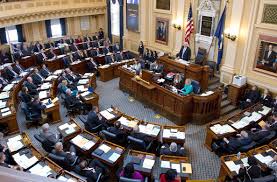 Days after Democrats conceded control of the Virginia House of Delegates to Republicans, they walked back that concession as two key races in which the GOP holds razor-thin leads appeared headed for recounts.

As of Tuesday, vote counts show Republicans with 50 seats and holding slight leads in two additional seats that have still not been called by The Associated Press. Democrats have 47 seats and are leading in one other district that has not been called.

In both districts where Republicans are leading, the margins are under 0.5%, which allows candidates to request state-funded recounts.

In District 91, Democrat incumbent Del. Martha Mugler conceded to Republican challenger A.C. Cordoza Friday. Mugler’s concession was quickly followed by a statement from Democratic House Speaker Eileen Filler-Corn, who acknowledged that with Mugler’s concession, the Republicans had control of the House, with 51 seats.

But Mugler walked back her concession over the weekend after final absentee and provisional ballots were tallied and Cordoza’s lead shrunk to just 94 votes out of 27,388 votes counted.

“The speaker’s stance is that there are provisions in place to make sure we can be certain what the outcomes are, and it’s always good to check. We’re just seeing what the outcome is going to be,” Filler-Corn spokesperson Sigalle Reshef said Tuesday.

Republicans, who celebrated last week after flipping at least five Democratic-held seats to bring their total to at least 50 — giving them at least a tie in the House — said they are confident that they will win both races that are now eligible for recounts.

“Based on past experience and our experience with observers on the ground, we are confident we will have 52 seats when the new General Assembly convenes in January,” said Garren Shipley, a spokesperson for House Minority Leader Todd Gilbert.

Republicans flipped the Democratic-held offices of governor, lieutenant governor and attorney general in a red surge on Nov. 2. The state Senate has a slim 21-19 Democratic majority, with elections scheduled for 2023.

The Republican victories are seen in part as a backlash against a series of progressive reforms that the former Democratic majority pushed through over the past two years, making Virginia an outlier in the South. Those included repealing the death penalty, loosening abortion restrictions and legalizing marijuana.