Three taken to hospital in separate incidents early Thursday morning on I-81 in Smyth County, VA 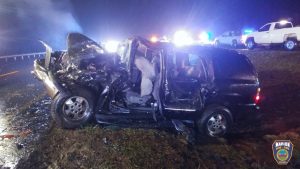 Three people were taken to the hospital in separate crashes early Thursday morning on Interstate 81 Southbound in Smyth County, VA.

According to Virginia State Police, they were called to a two vehicle crash at mile marker 42 just before 12:40 a.m, and determined a Chevy Tahoe traveling south, lost control, drove through the median, and struck a northbound tractor-trailer, causing the tractor-trailer to overturn. Both drivers were taken to the hospital to be treated for non-life threatening injuries.

Both of these crashes remain under investigation by VSP.