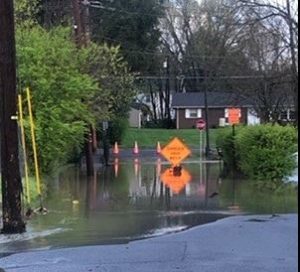 More than a dozen roads are shut down in Southwest Virginia due to torrential rains that has flood watches and warnings posted in several counties.

Russell and Tazewell counties had multiple roadways covered and more than two dozen roads region-wide are underwater according to the Virginia Department of Transportation.

Preliminary data from the National Weather Service in Morristown shows the Clinch and Holston rivers are approaching crest stage along their routes including the Cleveland area in Russell County and downstream in Scott County.

The weather agency in Blacksburg reported considerable runoff in Smyth County that triggered a flood warning along the Holston River’s north fork near Saltville. The group also anticipated flood events in places like the Mount Rogers Recreation District and Hungry Mother State Park and in the towns of Marion, Chilhowie, and Sugar Grove.