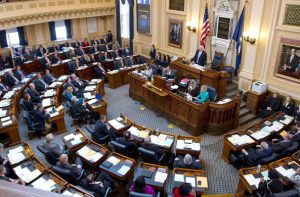 An adoption hoax case in Southwest Virginia has led to the introduction of a bill that would close the loophole allowing individuals to maliciously use internet devices to perpetrate costly and potentially devastating fraud on unsuspecting victims. Last June, Elizabeth Ann Jones pleaded guilty for an elaborate scheme and fraud against a California couple wanting to have a baby by adoption. Jones contacted the couple and told them she was pregnant and was looking for an adoption placement for her unborn child. Jones was convicted of obtaining money through false pretenses after the couple bought her meals and gifts. Had Jones not benefited financially from the hoax, she would have escaped prosecution. The bill is sponsored by Southwest Virginia Senator Ben Chafin.